Sparassidae (formerly Heteropodidae) are a family of spiders known as huntsman spiders because of their speed and mode of hunting. They also are called giant crab spiders because of their size and appearance. Larger species sometimes are referred to as wood spiders, because of their preference for woody places (forest, mine shafts, woodpiles, wooden shacks). In southern Africa the genus Palystes are known as rain spiders or lizard-eating spiders. Commonly they are confused with baboon spiders from the Mygalomorphae infraorder, which are not closely related.

More than a thousand Sparassidae species occur in most warm temperate to tropical regions of the world, including much of Australasia, Africa, Asia, the Mediterranean Basin, and the Americas.

Sparassidae are eight-eyed spiders. The eyes appear in two largely forward-facing rows of four on the anterior aspect of the prosoma. Many species grow very large – in Laos, Heteropoda maxima males attain a legspan of 250–300 mm (about 10–12 in). Persons unfamiliar with spider taxonomy commonly confuse large species with tarantulas, but huntsman spiders can generally be identified by their legs, which, rather than being jointed vertically relative to the body, are twisted in such a way that in some attitudes the legs extend forward in a crab-like fashion.

On their upper surfaces the main colours of huntsman spiders are inconspicuous shades of brown or grey, but many species have undersides more or less aposematically marked in black-and-white, with reddish patches over the mouthparts. Their legs bear fairly prominent spines, but the rest of their bodies are smoothly furry. They tend to live under rocks, bark and similar shelters, but human encounters are commonly in sheds, garages and other infrequently-disturbed places. The banded huntsman (Holconia) is large, grey to brown with striped bands on its legs. The Badge Huntsman (Neosparassus) is larger still, brown and hairy. The tropical or brown huntsman (Heteropoda) is also large and hairy, with mottled brown, white and black markings. The eyesight of these spiders is not nearly as good as that of the Salticidae (jumping spiders). Nevertheless, their vision is quite sufficient to detect approaching humans or other large animals from some distance.

Members of the Sparassidae are common in Australia, but also in many warm-temperate-to-tropical parts of the world. They have been accidentally introduced to many parts of the world, including China, Philippines, Japan, India and southern parts of the United States, such as Florida and Puerto Rico. A species of huntsman can be found in Hawaii, where it is commonly known as a cane spider. In general they are likely to be found wherever ships may bring them as unintended passengers to areas that are not too cold for them to survive in the winter. In southern Africa they are commonly known as rain spiders because of their tendency to seek shelter before rain storms, often entering human habitations when doing so.

As adults, huntsman spiders do not build webs, but hunt and forage for food: their diet consists primarily of insects and other invertebrates, and occasionally small skinks and geckos. They live in the crevices of tree bark, but will frequently wander into homes and vehicles. They are able to travel extremely fast, often using a springing jump while running, and walk on walls and even on ceilings. They also tend to exhibit a "cling" reflex if picked up, making them difficult to shake off and much more likely to bite. The females are fierce defenders of their egg sacs and young. They will generally make a threat display if provoked, but if the warning is ignored they may attack and bite. The egg sacs differ fairly widely among the various genera. For example, Palystes females generally suspend large purses in bushes. The sac is reinforced with dead leaves and similar material; if built indoors without disturbance, scraps of paper might be collected and used instead. [1][2]Australian Sparassid egg sac hatching[3][4]Palystes castaneus egg purse However, other genera build different sacs; Pseudomicrommata makes its nest in Eragrostis grass and may be ecologically confined to regions where the grass grows. Females of some species carry sacs in their jaws. 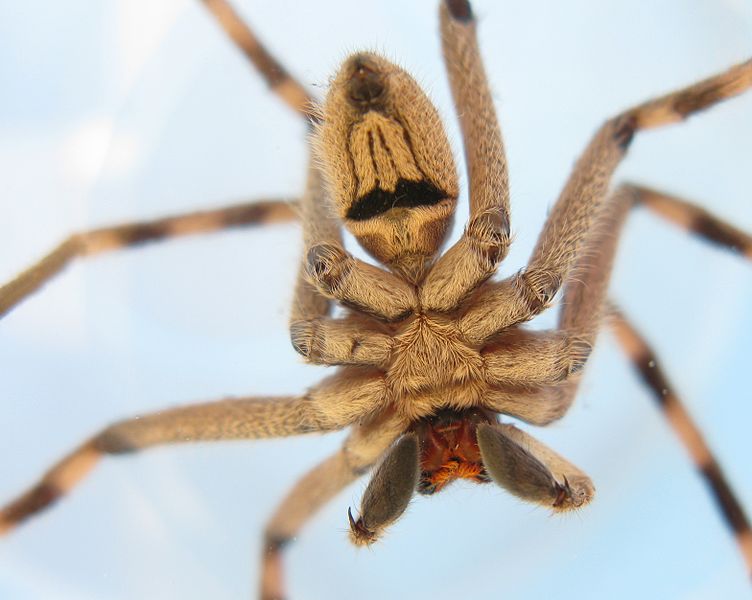 Like practically all spiders apart from the Uloboridae and some Liphistiidae and Holarchaeidae, Sparassidae use venom to immobilise prey and to assist in digestion. They have been known to inflict defensive bites, but are not widely regarded as dangerous to healthy humans. Huntsman spiders are widely considered beneficial because they feed on insect pests such as cockroaches.

There have been reports of members of various genera such as Palystes, Neosparassus (formerly called Olios) and several others, inflicting bites. The effects vary, including local swelling and pain, sometimes with nausea, headache, vomiting, irregular pulse rate, and heart palpitations, indicating some systemic neurological effects, especially when the bites were severe or repeated. However, the formal study of spider bites is fraught with complications, including unpredictable infections, dry bites, shock, and nocebo effects. An investigation into spider bites in Australia, in which Sparassidae figured prominently, did not note any severe or unusual symptoms resulting from confirmed bites from some of the most notorious genera, particularly Neosparassus.

It is not always clear what provokes Sparassidae to bite people, but it is known that female members of this family will aggressively defend their egg sacs and young against perceived threats. The frequency of bites on various body parts suggests that by far the most are accidental or incidental, resulting from inadvertent handling. Bites from Sparassids usually do not require hospital treatment. In particular no necrosis was reported in the works cited here.

Retrieved from "https://spidapedia.fandom.com/wiki/Huntsman_spider_(Sparassidae)?oldid=4009"
Community content is available under CC-BY-SA unless otherwise noted.