It is a venomous spider with a bite capable of causing serious injury or death in humans if left untreated.

The Reverend Octavius Pickard-Cambridge was the first to describe the Sydney funnel-web spider, from a female specimen in 1877. It still bears its original name of Atrax robustus. Some years later, William Joseph Rainbow described a male Sydney funnel-web as Euctimena tibialis, and female specimen as Poikilomorpha montana, before all were found to be the same species. 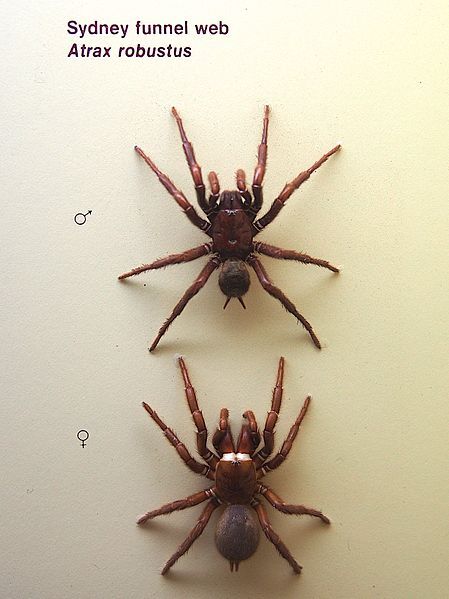 Sydney funnel-webs are medium to large in size, with body length ranging from 1 to 5 cm (0.39 to 2.0 in). They are glossy and darkly coloured, ranging from blue-black, to black, to brown or dark-plum coloured. The carapace covering the cephalothorax is almost hairless and appears smooth and glossy. Another characteristic are finger-like spinnerets at the end of their abdomen. The shorter-lived males are smaller than females but longer legged.

Atrax robustus is one of three species of the genus Atrax in the family Hexathelidae, the other two being Atrax sutherlandi and Atrax yorkmainorum. The Sydney funnel-web spider shares its name with some members of the genus Hadronyche. However, it remains, together with the northern tree funnel-web, the only Australian funnel-web spider known to have inflicted fatal bites to humans.

Sydney funnel-web spiders are mostly terrestrial spiders, favouring habitats with moist sand and clays. They typically build silk-lined tubular burrow retreats with collapsed "tunnels" or open "funnel" entrances from which irregular trip-lines radiate over the ground. In some exceptions, which lack trip-lines but may have trapdoors, the silk entrance tube may be split into two openings, in a Y or T form. Sydney funnel-webs burrow in sheltered habitats where they can find a moist and humid climate, for instance under rocks, logs or borer holes in rough-barked trees. The burrow may be in the hollow of a tree trunk or limb, many metres above ground level. The long-lived female funnel-webs spend most of the time in their silk-lined tubular burrow retreats. When potential prey, which includes insects, lizards or frogs, walks across the trip-lines, they rush out, subduing their prey by injecting their venom. Males, recognized by the modified terminal segment of the palp, tend to wander during the warmer months of the year, looking for receptive females to mate with. This makes encounters with male specimen more likely as they sometimes wander into backyards or houses, or fall into swimming pools. The spiders can survive such immersion for up to twenty-four hours, trapping air bubbles on hairs around their abdomen. The spiders are mainly active at night, as typical day-time conditions would dehydrate them. During the day, they seek cover in cool, moist hideaways. After heavy rain, spider activity is increased as their burrows may be flooded. When threatened or provoked, funnel-web spiders will display aggressive behaviour, rearing up on its behind legs and displaying their fangs. When biting, the funnel-web spiders maintain a tight grip on their victim, often biting repeatedly.

Distribution is primarily south of the Hunter River to the Illawarra region, and west to the Blue Mountains in New South Wales. However, unconfirmed reports contradicting Gray (1987) claim that the Sydney funnel-web spider has been found as far away as Canberra, 250 km (160 mi) from Sydney.

Funnel-web spider venom contains a compound known as atracotoxin, an ion channel inhibitor, which makes the 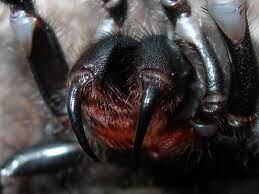 venom highly toxic for humans and primates. However, it does not affect the nervous system of other mammals.[3] These spiders typically deliver a full envenomation when they bite, often striking repeatedly, due to their defensiveness and large chitinous cheliceral fangs. There has been no reported case of severe envenoming by female funnel-web spiders, which is consistent with the finding that the venom of female specimen is less potent than the venom of their male counterparts. In the case of severe envenoming, the time to onset of symptoms is less than one hour; with a study about funnel-web spider bites finding a median time of 28 minutes. This same study revealed that children are at a particular risk of severe funnel-web envenoming, with 42% of all cases of severe envenoming being children. There is at least one recorded case of a small child dying within 15 minutes of a bite from a Sydney funnel-web spider, though that event occurred before the development of an antivenom. The antivenom was developed by a team headed by Struan Sutherland at the Commonwealth Serum Laboratories in Melbourne. Since the antivenom became available in 1981, there have been no recorded fatalities from Sydney funnel-web spider bites. In September 2012, it was reported that stocks of antivenom were running low, and members of the public were asked to catch the spiders so that they could be milked for their venom. One dose of antivenom requires around 70 milkings from a spider. 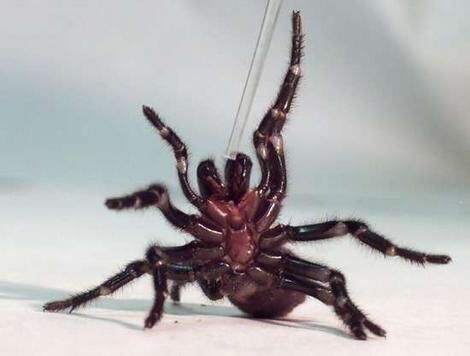