Cheiracanthium is a genus of spiders in the Miturgidae family. Certain species are commonly known as the "yellow sac spider".

Cheiracanthium are usually pale in colour, and have an abdomen that can range from yellow to beige. Both sexes range in size from 5 to 10 mm. Some yellow sac spiders are attracted to the smell of volatiles in gasoline. An unusual double pipe configuration in the Mazda6 led to a recall of around 65,000 Mazda6 vehicles in the US, Canada, Mexico and Puerto Rico from the 2009-10 model years after it was found that yellow sac spiders were building nests in the fuel system of the vehicles.

Cheiracanthium is primarily an Old World genus, with many species found from northern Europe to Japan, from Southern Africa to India and Australia. The only known species in the New World are C. inclusum and C. mildei. While the former also occurs in Africa and Réunion, the latter is found in the Holarctic region and Argentina. They can also be found in the lower mainland of British Columbia, Canada 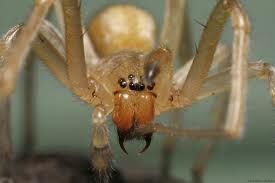 Cheiracanthium venom is purportedly necrotic, and it could cause a small lesion in humans. However, the necrotic nature and severity of the spider's bite has been disputed. Because of the possibly necrotic nature of the wound, MRSA infection is a danger and victims are advised to seek medical treatment. Painful bites may be incurred from such species as C. punctorium in Europe, C. mildei in Europe and North America, C. inclusum in the Americas, C. lawrencei in South Africa and C. japonicum in Japan.